The Bobby-C-Photography Blog is here!

For those who know me personally, it might cause a smile or even a bit of a chuckle, but yes, Bobby-C is ready to blog.

I thought for this first entry I’d tell a bit about myself, my interests and what I like to do with photography. Then give some ideas of post topics you’ll likely see from me in the future.

One of my first-ever photos from 1975

I took my first pictures when I was about 13-years-old. I wish I still had the small camera that I used back then. It was one that had been collecting dust for years. I remember threading the film into it, and going off to take some photos. I knew nothing about what I was doing, but in retrospect, they didn’t turn out too bad.

I can’t honestly say that I was immediately consumed with photography. Back then my means were meager, and I couldn’t afford to take lots of pictures. For Christmas that year my mother bought me a Kodak instamatic camera. It was the kind that took 110 film, and from there I 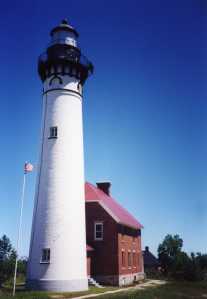 One of the first Lighthouses I ever photographed.

First, in July 2000 my wife and I took our four children on a week-long vacation in Michigan’s Upper Peninsula. While there, my wife “dragged” us along to three lighthouses. With nothing better to do, I photographed them (you might be getting the impression that Lights held no charm for me yet, and you’d be right).

When we came back, and I saw the photos I’d snapped, I was hooked. I was hooked on Lighthouses and on photographing them. Since that summer I have visited and photographed over 150 lighthouses in North America.

The second event had to do with a Christmas present. In 2005 I  was struggling to come up with something to get for my mom. A friend at work suggested I make her a calendar. So I did, and when my wife saw it, she asked me to make one for her mom as well. From there it grew. For 2010 I created calendars for 19 different individuals and families.

The spark in that event was that in order to create the calendars, I needed photos. So, the scanner sitting on my desk became my most important tool. I spent hours scanning photos and editing them for inclusion. Soon I realized that some of the photos needed to be restored, and so began that part of my passion.

In the future, look forward to articles from me on a variety of subjects including:

This is going to be a fun ride! Welcome aboard!